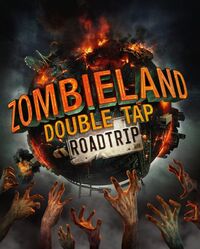 Zombieland: Double Tap - Road Trip is a top-down, twin-stick shooter that takes place after the events of the first movie. Players can play as one of the four original heroes from the movie – Tallahassee, Columbus, Wichita, and Little Rock – as well as unlockable characters from the sequel.

Add a photo to this gallery

Side Mission Boss- COACH CANNIBAL
Add a photo to this gallery

Retrieved from "https://zombieland.fandom.com/wiki/Zombieland:_Double_Tap_%E2%80%93_Road_Trip?oldid=4814"
Community content is available under CC-BY-SA unless otherwise noted.